Sound the alarms, call the banners, alert the media. I can’t believe I’m saying this, but there’s a new mascara that just bumped all but one of my current favorites from their places of honor on my shelf (read: mantlepiece). That’s right darlings, the only mascara that Damn Girl! by Too Faced couldn’t unseat is the one and only FetishEyes Mascara by Pat McGrath.

I was honestly so shocked when I first tried it, I was going to wear it on both eyes and test it for a full day, but after the first swipe, I was like – WHOA – what is going on? I canceled my plans. Hung up the phone. Changed out of the dress and heels I was going to wear and put on my testing uniform (my comfiest leggins, fuzziest socks and softest tee shirt, bra went right off and hair went right up). It was time to test this mascara and find out exactly how good it was. I knew instantly that it was amazing, so I needed to know, how did it compare to the rest, could it unseat one of my champions or was it too good to be true?

I pulled out my top five mascaras and began the process, and one by one, each mascara was unseated, even Caution by Hourglass (which I truly could not believe). This mascara is called Damn Girl, and yeah, that is exactly what I was thinking and saying over and over again as it beat out mascara after mascara. It’s luscious you guys, it’s extreme volume, insane length, and absolutely pure, powerfully black pigment.

This mascara really stands out in two ways, number one, the complete and utter lack of clumping, which considering the crazy volume you get is pretty much a total defiance of physics. Seriously, when mascaras pack this much volume, you just have to learn to deal with a little bit of clumping, and it’s nigh impossible to find a mascara that gives wild volume without clumping. That’s why I was so floored with Damn Girl, and it’s why I immediately knew this mascara might be a contender for my top five. I honestly can’t believe it’s real, the only other mascara that competes with its ability to give these crazy levels of volume without clumping is Pat McGrath’s FetishEyes mascara. It surpasses all my other favorites in terms of volume sans clump. All of them. Holy wow.

Then the other factor that truly blows the other mascaras out of the water is its super-duper lifting power. My god. Does this mascara ever lift and curl your lashes. Like, it curls and lifts so much that your lashes will feel curled in the exact way they feel after being in the lash curler, but it will last for HOURS. Hours you guys, that uplifted and curled feel, oh and yeah, it lifts and curls on its own. No curler needed. I don’t even understand it. I hate to overuse the phrase unreal, but it’s unreal as heck.

So let’s get right down to it, the comparison with FetishEyes, which as I’ve been saying, is the only mascara that can give it a real run for its damn money. FetishEyes is the best mascara I have ever, ever, ever used. It’s unreal. The only mascara that might as well be called false lashes in a tube. It’s the blackest, the boldest, the most voluminous, buildable, long-lasting, smudge-proof, lengthening, non-clumping mascara you will ever encounter. Pat McGrath is the god of makeup, she can do no wrong and we are just unworthy. Her products will change your life and FetishEyes changed my lash game in a way I never ever knew was possible. I’m honestly so surprised that I’m even now talking about a mascara that competes with it, like how is that possible? Too Faced, what is your secret?

So let’s get into it. Overall, FetishEyes does beat Damn Girl. It’s just a  little bit more voluminous, a little bit more lengthening, it’s a little bit longer lasting and more buildable. FetishEyes also definitely has more separation and more of a doll look. But for real, Damn Girl! Comes dang close. Damn Girl! Also has a few points on FetishEyes too. It’s easier to apply, while FetishEyes requires several coats to really get the full effect, one coat of Damn Girl gets you there, two coats takes you to freaking outer space. Also, FetishEyes can be a little messy, if you have longer lashes you might want a lash guard, or a super careful hand when applying to make sure you don’t get mascara on your upper eyelid. Damn Girl is way easier, I also love the wand, it’s hourglass-shaped and super full at the end, which is great for catching those inner and outer lashes.

So when it comes down to it, which mascara should you buy? I wish it were an easier decision, but since they are so close in price, FetishEyes is $28 and Damn Girl! is $25, so that doesn’t really help too much. Still, FetishEyes is almost $30 and that is ridiculous for a mascara. My inner voice is crying out “Ugggh but it’s so good and so worth it” and I agree. It’s the best, I’d sell my kidneys if needed to get my hands on it. Here’s the thing, I am hoping (and fervently praying and casting spells) that Damn Girl! Will come out with a mini size and I’m so glad I got a sample size. I will definitely keep buying FetishEyes but I will definitely also get Damn Girl if it comes out in a sample size. It would be so convenient for keeping in a smaller bag or for travel purposes. *Happy to report that they did come out with a mini size for $13!*

In terms of my recommendations for you, I’d say if you are new to mascara and are not used to applying several coats and want something that is super quick to apply, you might want to go for Damn Girl! Also, if curlers aren’t your thing, give Damn Girl a try and see if it’s lifting and curling powers make your lash curler obsolete. If on the other hand, you prefer absolute perfection and are willing to work for it (going the whole nine yards, curling your lashes and applying 3-4 coats), don’t settle for anything less than the best, FetishEyes was made for you. 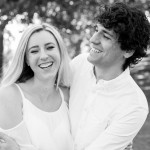